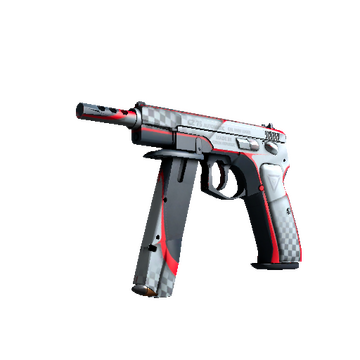 CZ75-Auto | Pole Position was added to the game on April 15, 2015, as part of The Chroma 2 Collection, which was released alongside the “Chromatic Scale” update. The skin was created by Coridium.

The body of the pistol is painted in various shades of gray and adorned with a checkerboard pattern located on the shutter, the magazine and the handle. The design is complemented by accents in the form of red curved stripes. The upper part of the handle is adorned with a triangle icon.

Float Value of the skin ranges from 0.00 to 0.70 which makes CZ75-Auto | Pole Position available in all conditions. Small abrasions appear on the body of the pistol in Minimal Wear condition. At levels of wear close to the maximum, the number and size of abrasions increase significantly, the skin becomes noticeably darker.

The quality of CZ75-Auto | Pole Position is Restricted. The skin has a StatTrak option.

CZ75-Auto | Pole Position became popular after the release and remains in demand today.

Relevant prices for CZ75-Auto | Pole Position skin on CS.MONEY are listed below.