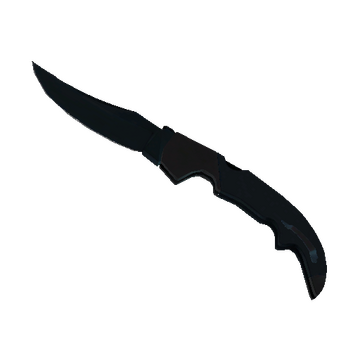 Falchion Knife | Night was added to the game on May 26, 2015, alongside the start of Operation Bloodhound. The skin is available in The Falchion Case.

Float Value of the skin ranges from 0.06 to 0.80, which makes Falchion Knife | Night available in all conditions. Small scratches and abrasions are already present along the cutting edge and on the tip in Factory New condition. At Float Values close to the maximum, the paint layer on the blade is almost completely peeled off.

The skin is most valued in Factory New condition, which is considered to be the rarest and the most expensive option. The quality of Falchion Knife | Night is Covert. The skin is available with the StatTrak counter and belongs to the "Night" series.

The skin was very popular when it was added to the game, but after the release of Falchion Knife | Ultraviolet, its popularity has significantly decreased. Today, Falchion Knife | Night is rarely seen in the game.