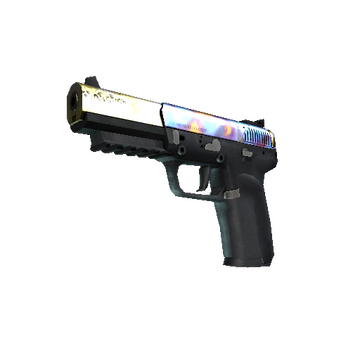 Five-SeveN | Case Hardened was added to the game on November 8, 2013, as part of The Arms Deal 2 Collection, which was released alongside “The Arms Deal 2” update.

The case-hardened slide of the pistol is covered with stains in various shades of blue, yellow and purple. The rest of the weapon is not painted.

Float Value of the skin ranges from 0.00 to 1.00, which makes Five-SeveN | Case Hardened available in all conditions. Scratches and abrasions do not appear on the body of the pistol. At levels of wear close to the maximum, the slide is coated with a layer of patina, which makes the skin look noticeably darker.

The quality of Five-SeveN | Case Hardened is Restricted. The skin has a StatTrak option and belongs to the "Case Hardened" series.

Five-SeveN | Case Hardened became popular after the release and remains in demand today.