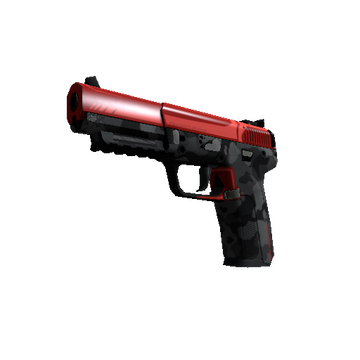 Five-SeveN | Urban Hazard was added to the game on November 11, 2014, as part of The Vanguard Collection, which was released alongside the start of Operation Vanguard. The skin was created by RaekenTheRock.

The body of the pistol is adorned with black-and-gray camouflage pattern. The slide is painted red and complemented with light red geometric elements. Individual small parts of the weapon are not painted.

Float Value of the skin ranges from 0.00 to 0.25, which makes Five-SeveN | Urban Hazard available in all conditions except Well-Worn and Battle-Scarred. Small abrasions are already present on the body of the pistol in Factory New condition. At levels of wear close to the maximum, the number and size of abrasions increase slightly.

The quality of Five-SeveN | Urban Hazard is Mil-Spec Grade. The skin has a StatTrak option and belongs to the "Urban Hazard" series.

Five-SeveN | Urban Hazard became popular after the release and remains in demand today.