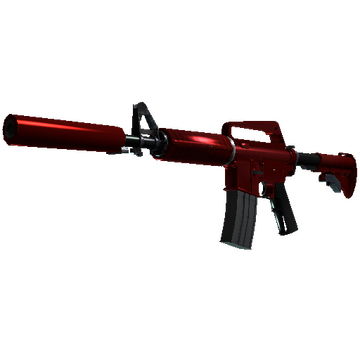 M4A1-S | Hot Rod was added to the game on May 26, 2015, as part of The Chop Shop Collection, which was released alongside the start of the Operation Bloodhound.

The chromed body of the rifle is coated with translucent red paint. The barrel, the handle and part of the buttstock are made in black. The magazine remains unpainted.

Float Value of the skin ranges from 0.00 to 0.08, which makes M4A1-S | Hot Rod available only in Factory New and Minimal Wear condition. At levels of wear close to the maximum, small abrasions appear in different parts of the rifle.

M4A1-S | Hot Rod is Classified. The skin is not available with the StatTrak counter and has no souvenir option. The skin belongs to the "Hot Rod" series.

The quality of M4A1-S | Hot Rod became popular after the release and is the most popular skin in the Hot Rod series. The skin is in demand among collectors of red skins (Blood Inventories).

Relevant prices for M4A1-S | Hot Rod skin on CS.MONEY are listed below.