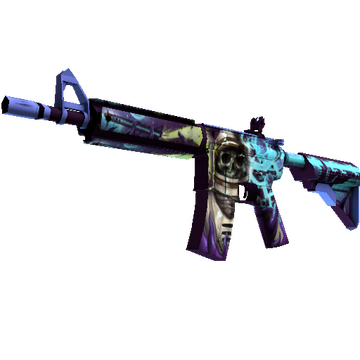 M4A4 | Desolate Space was added to the game on June 15, 2016, as part of The Gamma Collection, which was released alongside the “Gamma Exposure” update. The skin was created by Andy and DryDoctorEgg.

Float Value of the skin is limited ​​from 0.00 to 0.80, which makes M4A4 | Desolate Space available in all conditions. The first abrasions appear on the body of the rifle in Field-Tested condition. At levels of wear close to the maximum, the size of the abrasions slightly increases, the remaining paint layer becomes noticeably darker.

The quality of M4A4 | Desolate Space is Classified. The skin has a StatTrak option. In the Chinese version of the skin, the image of a skull has been removed.

M4A4 | Desolate Space became popular after the release and remains in demand today.