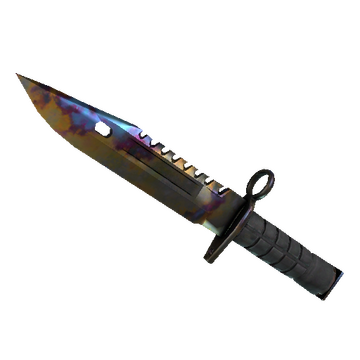 The hardened blade of the knife and the guard are covered with blue, violet, and yellow stains. The handle remains unpainted.

The skin is available in all conditions, and its Float Value is unlimited. Traces of wear such as scratches and abrasions do not appear on the knife even at the highest Float Values. At levels of wear close to the maximum, the blade is coated with a layer of patina and looks significantly darker.

The quality of tM9 Bayonet | Case Hardened is Covert. The skin has a StatTrak option and belongs to the "Case Hardened" series.

"Case Hardened" is one of the most popular skins for M9 Bayonet and has a very large number of fans. Rare pattern variations of M9 Bayonet | Case Hardened are highly valued by skin collectors.

Relevant prices for ★ M9 Bayonet | Case Hardened skin on CS.MONEY are listed below.