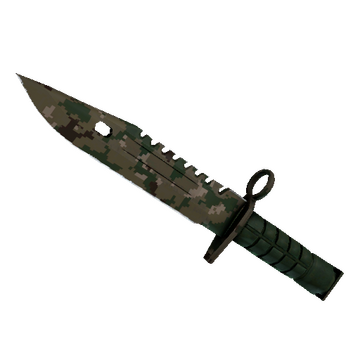 The blade of the knife and the guard are adorned with a pixel camouflage pattern. The color scheme of the pattern is typical for the forest camouflage and includes green, khaki, beige, and brown. The handle is painted dark green.

Float Value of M9 Bayonet | Forest DDPAT ranges from 0.06 to 0.80, which makes the skin available in all conditions. The first abrasions start to appear on the spine. At Float Values close to the maximum, about 90% of the paint layer is peeled on the blade. The paint is almost completely peeled on the guard, the spine and around the hole.

The quality of M9 Bayonet | Forest DDPAT is Covert. The skin has a StatTrak option and belongs to the "Forest DDPAT" series. This is one of the most affordable skins for this type of knife.

M9 Bayonet | Forest DDPAT became popular after the release and remains in demand today. The skin is often seen in the game due to a relatively low price.

Relevant prices for ★ M9 Bayonet | Forest DDPAT skin on CS.MONEY are listed below.