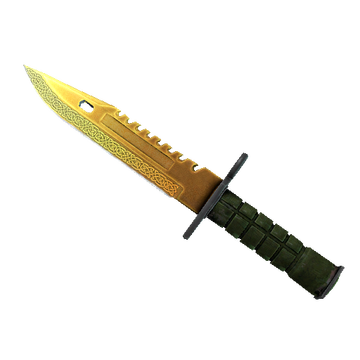 M9 Bayonet | Lore was added to the game on June 15, 2016, alongside the “Gamma Exposure” update. The skin is available in all “Gamma” cases.

The design of the skin is inspired by the legendary AWP | Dragon Lore. The blade of the knife is coated with gold metallic paint and adorned with a translucent medieval pattern. The cutting edge is decorated with a Celtic ornament made in yellow-orange tones with a dark brown outline. The handle is painted dark green and the guard remains unpainted.

Float Value of M9 Bayonet | Lore ranges from 0.00 to 0.65, which makes the skin available in all conditions. The first abrasions start to appear on the spine in Minimal Wear condition. At Float Values close to the maximum, about 15% of the paint layer is peeled on the blade, and the remaining paint darkens. Significant scratches and abrasions are present on the guard, the spine and around the hole.

The quality of M9 Bayonet | Lore is Covert. The skin has a StatTrak option and belongs to the "Lore" series.

“Lore” is one of the most popular skins in the game and has a very large number of fans.

Relevant prices for ★ M9 Bayonet | Lore skin on CS.MONEY are listed below.