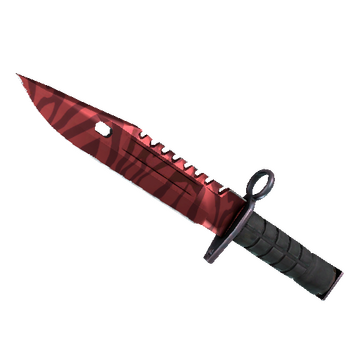 The blade of the knife and the guard are adorned with an abstract pattern made with aluminum and chrome paints and coated with red translucent paint. The handle remains unpainted.

Float Value of M9 Bayonet | Slaughter ranges from 0.00 to 0.26, which makes the skin available only in Factory New, Minimal Wear and Field-Tested condition. The first abrasions start to appear on the spine. At Float Values close to the maximum, significant abrasions are present on the guard, the spine and around the hole.

The quality of M9 Bayonet | Slaughter is Covert. In some pattern variations, the elements of the pattern create different shapes resembling a heart, a diamond, an angel, etc. The skin has a StatTrak option and belongs to the "Slaughter" series.

M9 Bayonet | Slaughter was very popular after the release, but today its popularity has decreased.

Relevant prices for ★ M9 Bayonet | Slaughter skin on CS.MONEY are listed below.