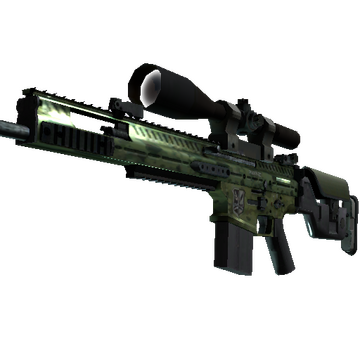 SCAR-20 | Green Marine was added to the game on September 17, 2015, as part of The Shadow Collection, which was released alongside the “Shadow Boxing” update. The skin was created by PTP.

The main part of the rifle is painted with dark green metallic paint and adorned with an abstract pattern resembling camouflage. The buttstock is painted solid black and complemented by a perforated green pad. The scope, the handle, the barrel and individual small parts of the weapon are not painted.

Float Value of the skin is limited ​​from 0.00 to 0.80, which makes SCAR-20 | Green Marine available in all conditions. Small abrasions are already present on the body of the rifle in Factory New condition. At levels of wear close to the maximum, the number and size of abrasions increase, the body of the rifle is coated with a layer of patina, which makes the skin look noticeably darker.

The quality of SCAR-20 | Green Marine is Mil-Spec Grade. The skin has a StatTrak option.

SCAR-20 | Green Marine was in demand after the release, but over time its popularity has noticeably decreased. Today, the skin is rarely seen in the game.

Relevant prices for SCAR-20 | Green Marine skin on CS.MONEY are listed below.