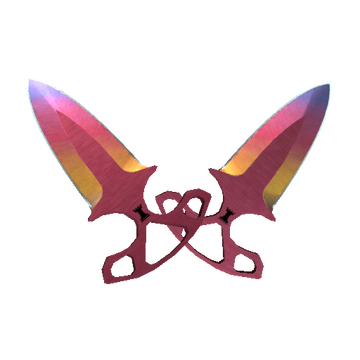 Shadow Daggers | Fade were added to the game on September 17, 2015, alongside “Shadow Boxing” update. The skin is available in The Shadow Case.

The blades of the knives are chromed and coated with translucent paints creating gradient transitions. The pattern is made in various shades of purple, pink and yellow. The color ratio depends on the pattern index. The handles are painted red.

Float Value of the skin ranges from 0.00 to 0.08, which makes Shadow Daggers | Fade available only in Factory New and Minimal Wear condition. At levels of wear close to the maximum, small abrasions appear on the tips of the blades and on the guards.

The quality of Shadow Daggers | Fade is Covert. The skin has a StatTrak option and belongs to the "Fade" series.

The skin became very popular after the release and remains in demand today.

Relevant prices for ★ Shadow Daggers | Fade skin on CS.MONEY are listed below.