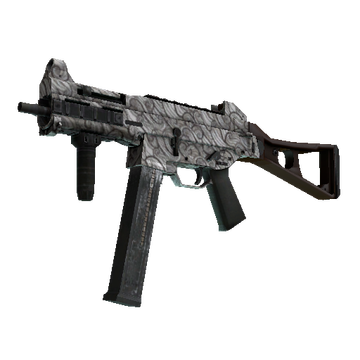 UMP-45 | Gunsmoke was added to the game on November 27, 2013, as part of The Italy Collection, which was released alongside the “Out with the old, in with the new” update.

The receiver of the submachine gun is adorned with an abstract pattern of curls and wavy lines painted in various shades of beige and brown. The buttstock is painted solid brown. The handle, the magazine and individual parts of the body are not painted

Float Value of the skin ranges from 0.06 to 0.80, which makes UMP-45 | Gunsmoke smoke available in all conditions. Small abrasions are already present on the body of the weapon in Factory New condition. At levels of wear close to the maximum, about 50% of the paint layer is peeled off.

The quality of UMP-45 | Gunsmoke is Industrial Grade. The skin has a souvenir option and looks good in combination with stickers such as “Drug War Veteran”, “Nice Shot”, “T on Cat” and “Nelu the Bear“. The skin is also available for P250 and MP7.

UMP-45 | Gunsmoke became popular after the release and remains in demand today.

Relevant prices for UMP-45 | Gunsmoke skin on CS.MONEY are listed below.