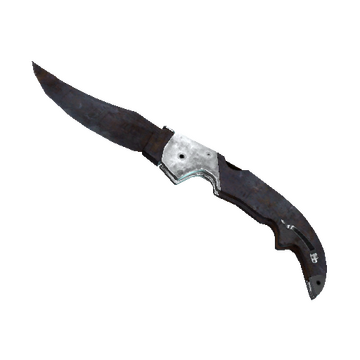 Falchion Knife | Rust Coat was added to the game on March 15, 2017, alongside the "Take a trip to the Canals" update. The skin is available in the cases "Spectrum" and "Spectrum 2".

The blade and the main part of the handle are coated with an uneven layer of rust. The color of the metal depends on levels of wear and varies from gray-blue to orange-brown. The front and the back part of the handle remain unpainted.

Float Value of the skin ranges from 0.40 to 1.00, which makes the skin available only in Well-Worn and Battle-Scarred condition. At the lowest Float Values, the blade is gray-blue and has only a few stains of rust. At levels of wear close to the maximum, the entire blade turns orange-brown. Many players prefer Falchion Knife | Rust Coat at Float Values from 0.90 to 1.00.

The main feature of the skin is the layer of rust coating the blade and the biggest part of the handle. The quality of Falchion Knife | Rust Coat is Covert. The skin has a StatTrak option and belongs to the "Rust Coat" series.

Falchion Knife | Rust Coat is not on the list of popular skins and is rarely seen in the game.