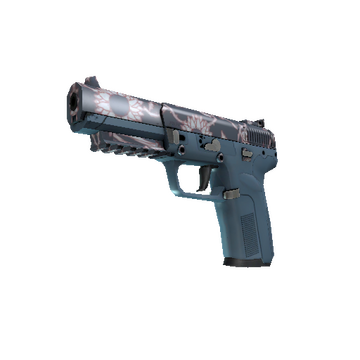 Five-SeveN | Nightshade was added to the game on December 18, 2013, as part of The eSports Winter 2013 Collection, which was released alongside the “Winter Offensive” update.

The body of the gun is coated with gray-blue paint. The slide is adorned with a floral pattern in the form of light gray flowers and leaves with a burgundy outline.

Float Value of the skin ranges from 0.00 to 0.50, which makes Five-SeveN | Nightshade available in all conditions. Small abrasions are already present on the body of the pistol in Factory New condition. At levels of wear close to the maximum, the number and size of abrasions increase.

The quality of Five-SeveN | Nightshade is Mil-Spec Grade. The skin has a StatTrak option.

Five-SeveN | Nightshade was in demand after the release, but over time its popularity has noticeably decreased. Today, the skin is rarely seen in the game.

The pattern index affects the texture overlay. The most valuable pattern variations are those where the texture creates a shape resembling a heart located on the back part of the slide.