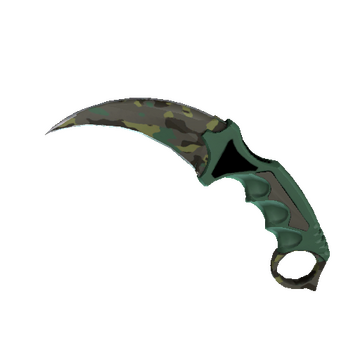 The blade of the knife is adorned with a classic forest camouflage pattern made in green, brown, and khaki. The handle is painted green and complemented with dark beige inserts.

The skin is available in all conditions, and its Float Value ranges from 0.06 to 0.80. Levels of wear can be determined by the size and number of abrasions, which start to become noticeable already in Minimal Wear condition, but at this stage, they are almost unnoticeable as they blend with the pattern. At Float Values close to the maximum, about 50% of the paint layer is peeled.

The quality of Karambit | Boreal Forest is Covert. The skin has a StatTrak option and belongs to the "Boreal Forest" series.

Karambit | Boreal Forest became popular after the release and remains in demand today. The skin is often seen in the game due to a relatively low price.

The pattern index affects the overlay of the camouflage texture. Special or rare variations of the pattern are absent.

Relevant prices for ★ Karambit | Boreal Forest skin on CS.MONEY are listed below.