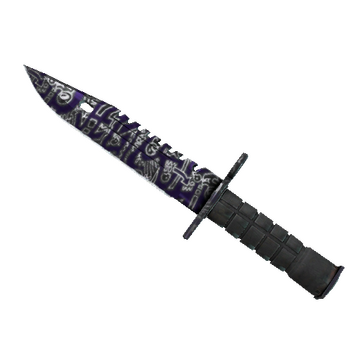 M9 Bayonet | Freehand was added to the game on June 15, 2016, alongside the “Gamma Exposure” update. The skin is available in all “Gamma” cases.

The blade of the knife and the guard are painted dark purple and adorned with white drawings in the form of little men, arrows, lightning bolts, wavy lines, etc. The handle remains unpainted.

Float Value of M9 Bayonet | Freehand ranges from 0.00 to 0.48, which makes the skin available in all conditions. The first abrasions start to appear on the spine. At Float Values close to the maximum, about 30% of the paint layer is peeled on the blade. Significant abrasions are present on the guard, the spine and around the hole.

The quality of M9 Bayonet | Freehand is Covert. The skin has a StatTrak option and belongs to the "Freehand" series.

M9 Bayonet | Freehand is not on the list of popular skins and is rarely seen in the game.

Depending on the pattern index, the set of images on the blade changes.

Relevant prices for ★ M9 Bayonet | Freehand skin on CS.MONEY are listed below.