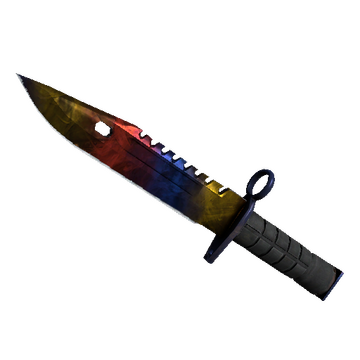 M9 Bayonet | Marble Fade (M9 MF) was added to the game on January 08, 2015, alongside the "Full Spectrum" update. The skin is available in all "Chroma" cases.

The blade of the knife and the guard are painted with metallic paints and adorned with a pattern of translucent wavy lines resembling smoke. The color scheme of the skin includes various shades of yellow, blue and red creating gradient transitions. The handle remains unpainted.

Float Value of the skin ranges from 0.00 to 0.08, which makes M9 Bayonet | Marble Fade available only in Factory New and Minimal Wear condition. At levels of wear close to the maximum, the knife has noticeable scratches and abrasions located on the spine and around the hole. Little abrasions are also present on other edges of the blade.

The quality of M9 Bayonet | Marble Fade is Covert. The skin has a StatTrak option and belongs to the "Marble Fade" series.

M9 Bayonet | Marble Fade is one of the most popular skins in the game and has a very large number of fans.

The appearance of M9 Bayonet | Marble Fade highly depends on the pattern index. The rarest and the most expensive pattern variations are “Max Red Tip” and “Red Tip”, which are distinguished by the presence of red on the tip of the blade. The less valuable patterns are “Max Blue Tip” and “Blue Tip”. The most common pattern variation is “Yellow Tip”, which has a tip painted yellow or orange.

Relevant prices for ★ M9 Bayonet | Marble Fade skin on CS.MONEY are listed below.