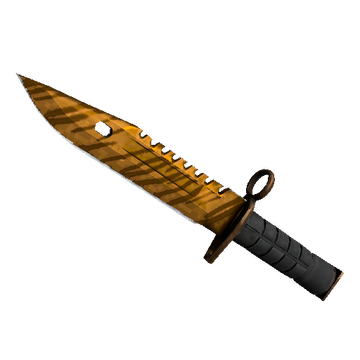 M9 Bayonet | Tiger Tooth (M9 TT) was added to the game on January 08, 2015, alongside the "Full Spectrum" update. The skin is available in all "Chroma" cases.

The blade of the knife and the guard are coated with yellow metallic paint and adorned with brown stripes imitating the tiger color. The handle remains unpainted.

Float Value of the skin ranges from 0.00 to 0.08, which makes M9 Bayonet | Tiger Tooth available only in Factory New and Minimal Wear condition. At levels of wear close to the maximum, the knife has noticeable scratches and abrasions located on the spine and around the hole. Little abrasions are also present on other edges of the blade.

The quality of M9 Bayonet | Tiger Tooth is Covert. The skin has a StatTrak option and belongs to the "Tiger Tooth" series.

The pattern index affects the arrangement of the stripes. Special or rare variations of the pattern are absent.

Relevant prices for ★ M9 Bayonet | Tiger Tooth skin on CS.MONEY are listed below.