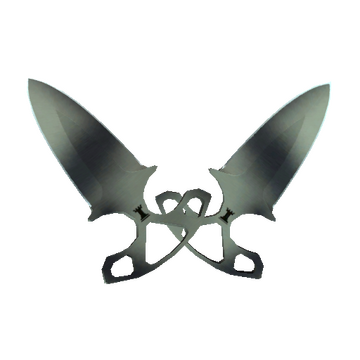 Shadow Daggers | Scorched were added to the game on September 17, 2015, alongside “Shadow Boxing” update. The skin is available in The Shadow Case.

The entire bodies of the knives are spray-painted black and beige. The paint spots create a pattern resembling camouflage.

Float Value of the skin ranges from 0.06 to 0.80, which makes Shadow Daggers | Scorched available in all conditions. Small scratches and abrasions are already present on the tips of the blades and on the guards in Factory New condition. At Float Values close to the maximum, about 50% of the paint layer is peeled off.

The quality of Shadow Daggers | Scorched is Covert. The skin has a StatTrak option and belongs to the "Scorched" series. This is one of the most affordable skins for this type of knife.

Shadow Daggers | Scorched were popular after the release and remain in demand today. The skin is often seen in the game due to a relatively low price.

Relevant prices for ★ Shadow Daggers | Scorched skin on CS.MONEY are listed below.