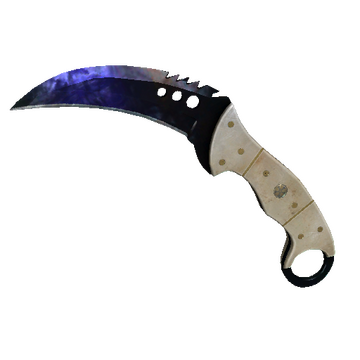 Talon Knife | Doppler Phase 4 (Talon P4) was added to the game on March 13, 2018, alongside the "Seeing the Light" update. The skin is available in the "Prisma" case.

The blade of the knife is painted with metallic paints and adorned with a pattern of translucent wavy lines resembling smoke. The color scheme of the skin includes various shades of blue, brown and black creating gradient transitions. The handle remains unpainted.

Float Value of the skin ranges from 0.00 to 0.08, which makes Talon Knife | Doppler Phase 4 available only in Factory New and Minimal Wear condition. At levels of wear close to the maximum, the knife has noticeable scratches and abrasions located along the cutting edge.

Due to a relatively low price, Talon Knife | Doppler Phase 4 became one of the most popular and common skins in the “Doppler” series.

The pattern index affects the ratio of colors as well as the location of blue, brown and black areas. Pattern variations with a predominance of blue on the play side of the blade are titled “BTA Blue”. Knives with only blue color on the blade resemble Talon Knife | Doppler Sapphire and are titled “Max Blue”.

Relevant prices for ★ Talon Knife | Doppler Phase 4 skin on CS.MONEY are listed below.