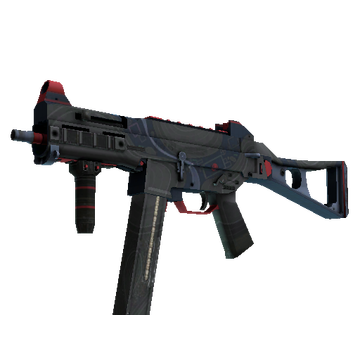 UMP-45 | Briefing was added to the game on August 18, 2016, as part of The Gamma 2 Collection, which was released alongside the “Double Exposure” update. The skin was created by PoignantEnvy.

The entire body of the submachine gun is adorned with a pattern resembling a terrain map. The pattern is painted in various shades of gray. The design is complemented by numerous red accents. Individual parts of the body are painted solid gray.

Float Value of the skin ranges from 0.00 to 1.00, which makes UMP-45 | Briefing available in all conditions. Small scratches and abrasions are already present on the body of the weapon in Factory New condition. At levels of wear close to the maximum, the number and size of abrasions increase significantly, the paint layer is completely peeled off on the magazine, the handle and individual parts of the body.

The quality of UMP-45 | Briefing is Mil-Spec Grade. The skin is available with a StatTrak module and looks good in combination with tournament stickers such as “Avangar | Boston 2018”, “Faze Clan | Atlanta 2017” and “HellRaisers | Katowice 2015” as well as the usual stickers “Longevity”, “Perry”, “Friendly Fire” and “The Bot”. The skin is also available for the M4A1-S.

UMP-45 | Briefing became popular after the release and remains in demand today.

Relevant prices for UMP-45 | Briefing skin on CS.MONEY are listed below.