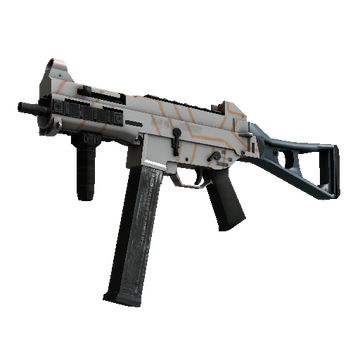 UMP-45 | Labyrinth was added to the game on July 1, 2014, as part of The Breakout Collection, which was released alongside the start of Operation Breakout. The skin was created by MultiH.

The receiver of the submachine gun is painted in a light shade of gray and complemented with a geometric pattern of orange lines. The buttstock is painted solid black. The magazine, the handle and individual parts of the body are not painted.

Float Value of the skin ranges from 0.00 to 0.40, which makes UMP-45 | Labyrinth available in all conditions except Battle-Scarred. Small abrasions are already present on the body of the weapon in Factory New condition. At levels of wear close to the maximum, the number and size of abrasions increase.

The quality of UMP-45 | Labyrinth is Mil-Spec Grade. The skin is available with a StatTrak module and looks good in combination with stickers such as “Luck Skill”, “Stupid Banana”, “Firestarter” (holo), “Bomb Doge” and “Thug Life”.

UMP-45 | Labyrinth is not on the list of popular skins and is rarely seen in the game.

Relevant prices for UMP-45 | Labyrinth skin on CS.MONEY are listed below.