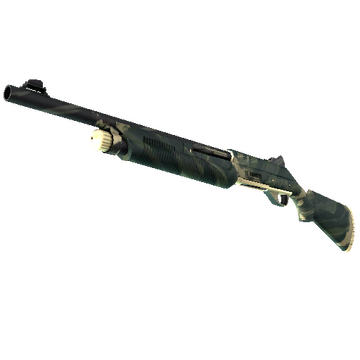 Nova | Ranger was added to the game on May 25, 2015, as part of The Falchion Collection, which was released alongside the start of Operation Bloodhound. The skin was created by PoignantEnvy.

The beige body of the shotgun is painted with brush strokes in various shades of green. The design is complemented by beige accents and a light green inscription “NOVA” located above the trigger.

Float Value of the skin ranges ​​from 0.00 to 1.00, which makes Nova | Ranger available in all conditions. Small scratches and abrasions are already present on the body of the shotgun in Factory New condition. At levels of wear close to the maximum, the number and size of abrasions increase slightly, the skin becomes noticeably darker.

The quality of Nova | Ranger is Mil-Spec Grade. The skin is available with a StatTrak module and looks good in combination with stickers of teams such as “Sprout”, “FlipSid3” and “Optic Gaming” as well as the usual stickers “Drug War Veteran”, “The Zombie” and “Flickkshot”.

Nova | Ranger became popular after the release and remains in demand today.

Relevant prices for Nova | Ranger skin on CS.MONEY are listed below.