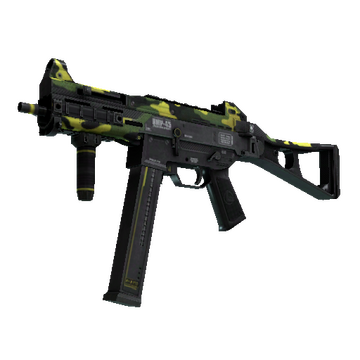 UMP-45 | Riot was added to the game on May 26, 2015, as part of The Falchion Collection, which was released alongside the start of Operation Bloodhound. The skin was created by M1nDᵈᵉˢᶥᶢᶰˢ.

Part of the receiver and the upper part of the buttstock are adorned with a camouflage pattern painted in black, yellow and various shades of green. The buttstock and individual parts of the body are decorated with carbon fiber inserts. The design of the skin is complemented by accents in the form of yellow stripes and white technical inscriptions.

Float Value of the skin ranges from 0.00 to 0.70, which makes UMP-45 | Riot available in all conditions. Small abrasions already appear on the body of the weapon in Factory New condition. At levels of wear close to the maximum, the number and size of abrasions increase, the remaining paint layer becomes slightly darker.

The quality of UMP-45 | Riot is Mil-Spec Grade. The skin is available with a StatTrak module and looks good in combination with tournament stickers such as “FlipSid3 Tactics | Katowice 2015” and “Optic Gaming | Atlanta 2017” as well as the usual stickers "Devouring flame” and "Dragon".

UMP-45 | Riot became popular after the release and remains in demand today.

Relevant prices for UMP-45 | Riot skin on CS.MONEY are listed below.